(I have to admit that even during the worst labor pains, I was busily writing my birth story. I have a bad habit of writing – mentally – about things even while they’re happening, and there were no exceptions here.)

I know that I’ll be coming back to add/improve/clarify this birth story for at least a month, so this will have to serve as a rough draft at best.

I had originally thought that we might just have a due-date baby (September 5th) due to the fact that our due date fell on a full moon – our midwife had told us that full moons and bad weather tend to put moms into labor. Well, we didn’t make it to the full moon – the bad weather got to us first!


I had a ton of long-lasting pre-labor symptoms that had me living on edge for about 2 weeks before baby actually arrived – a week and a half of an upset tummy, a week of menstrual-type cramps, and 48 hours of blood-tinged mucous. Completely unlike last time (when labor set in suddenly). It was kind of like waiting for the other shoe to drop… and it took its time to do so!

On Monday night (August 31st) we had a terrific electrical storm – thunder, lightning and lots of rain. I wondered briefly if “tonight would be the night.” Thankfully we were ready! (We found out later that the storm brought not only our baby, but two more – our midwives had three births that night!! One of our midwives arrived at our labor straight from another birth, and our other midwife arrived at our labor only to have to leave ten minutes later to attend another birth - you can read that birth story here.)

I went to bed sometime around 10:30 p.m. and woke up at 11:36 p.m. to use the restroom. When I sat up, my water broke! But unlike last time, when there was enough fluid to drench several counties (thus making it quite obvious what had happened), this time there was only a small amount of fluid – making me unsure if my water had really broken or not. However, by the time I had made a quick trip to the bathroom to clean up, I had already had one good, strong contraction – and so I knew that this was the real thing.

I let my husband, Joe, know what had happened and went back to bed in hopes that labor would hold off long enough to get some sleep, as I was quite tired. However, it was not to be. Two strong contractions later I was resigned to the inevitable – so I hopped out of bed and started moving our birth supplies out to the kitchen table and posting the informational signs I had made for our birth team, and generally getting things ready. I was quite nervous.

Sometime around 1:00 a.m., Joe went ahead and called our midwife. I hesitated on letting him do this, as I didn’t want to wake her (not knowing she was already at another birth!), but things were really moving quickly and he thought it would be best. She told him to go ahead and get our doulas, Rose and Nikki, to come over, so he called them and they said that they would be on their way. I was really embarrassed when Joe told me that he had called them already, as I thought that they wouldn’t be needed for several hours and shouldn’t be bothered. However, our midwife was really on-target with that one (surprise, surprise!) – by the time they arrived, I was completely ready to have them there.

When our doulas arrived, I was still able to deal with contractions by closing my eyes and focusing, but within a short time of their arrival I felt the need to start moaning with each contraction. I asked them how soon they thought I could get in the tub, and they said that any time would be good! So they went to start getting things ready in there.

I should say that despite the hours of research I have put into the subject, the only method of pain management I have found that works for me is making massive amounts of noise – moaning, groaning, shouting, yelling, whatever. Sad, but true! I trust that our birth team is recovering well from their client-induced hearing loss, because I was quite loud – just like last time, but this time I didn’t bother trying to suppress or control it.

I got in the tub sometime around 2:00 a.m., and stayed there for the rest of the labor and birth. Things really moved along quickly. Contractions got more and more and more painful, and I got louder and louder and louder! That about sums it up. Having our doulas there was a wonderful godsend – their coaching, encouragement and physical help were lovely. It didn’t reduce the pain, but it made it less of a panic-stricken ordeal and more of a journey with companions who had been there before. If you don’t have a doula, get one!!!
Our midwife arrived at 4:00-something, and our second midwife arrived shortly thereafter – however, she had to leave for another birth within a short time, so one of their students was called to help out. We were sorry to lose our other midwife, but their student did a terrific job as well. 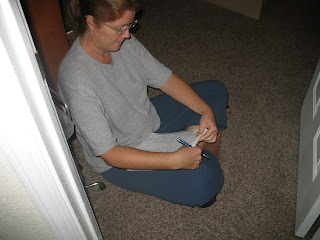 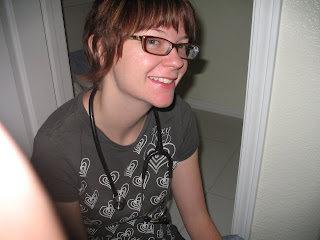 I found it super-interesting to notice changes between my first and second labors. For one thing, it didn’t get as painful or as terrifying. It was still hard and extremely painful, but it never reached the level of labor #1. My estimate is that it got to about 70% of labor #1, plus or minus about 15%.

Additionally, I stayed much more cognizant of my surroundings. With my first labor, I was really out of it. I didn’t notice most of what was going on or being said, I didn’t notice anything that was being brought in or done around me, and I completely lost the ability to communicate verbally with anyone (I spent about 2 hours trying to say hello to my midwives – never managed it.) With this labor, I noticed most of what was going on (people arriving, equipment being brought in, etc.) and was able to hold a conversation throughout my entire labor (though I refrained through most of active labor due to fatigue and the need to focus – but I was always able to communicate when I wanted to). I even managed to greet all three of our midwives and hold (extremely) brief conversations with each of them. Fascinating! That fact alone made me think that I was a lot less further along than I really was. 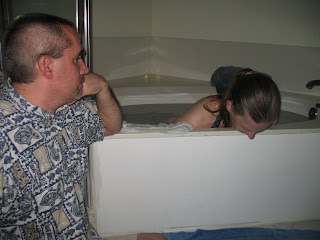 Our three-year-old woke up at 5:00 a.m., and Joe got him started with some toys, which kept him happy. He wandered in and out of the bathroom at various intervals, always pausing to spout some of his birth knowledge (“Mommy has to make noise to get the baby out”) and adding a tag about Winnie the Pooh (“And Tiggers don’t like honey!”). He was completely unphased throughout the whole thing. According to my best memory, he was present during the entire pushing phase and the birth, as intense as it got, and dealt with it perfectly. We had set up a babysitting team who ended up being unable to be there for the birth, but thankfully he didn’t even need much supervision – our preparation definitely paid off! He was just fine. 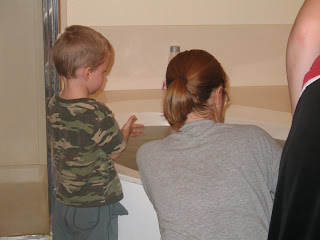